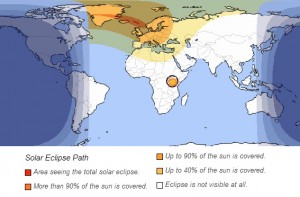 The 20th March 2015, between 07.41 and 11.50 a solar eclipse can be observed from Shetland. With at its peak more then 90% of the sun covered Shetland is the best place in the UK to observe this event.
It also kicks of the Cruise line season early as some cruise liners will visit Lerwick to or on the way back from the full Eclipse location.

In 1999 during an earlier visit to Shetland I also had the privilege of observing a partial eclipse.
Photographing the eclipse can be done in several ways but here is a simple way I used. A black plastic plate (or any dark vessel that holds water) was used to reflect only part of the light so it did not flood the lens.

The result was this photograph showing a 30% coverage of the sun. It also shows clouds. So lets hope the 20th of March will give us a clear sky to enjoy this unique spectacle! And do remember, it does get pretty dark for a while!

Posted in Column | Comments Off on Solar Eclipse

An amazing sound, not heard for over 30 years! Sumburgh Head Lighthouse Visitor Centre has a new attraction now the original Foghorn is also in fully working order again. The deep booming sound kept ships from getting to close to the cliffs of Sumburgh head, Shetlands most Southerly tip.
The Lighthouse has been restored in 2014 and now has a visitors centre and the RSPB Sumburgh nature reserve has a special educational room with an amazing view.
Part of the lighthouse also has accommodation in the form of self catering holiday units. Check in with Shetland Lighthouse Holidays to find out more.

Posted in Column | Comments Off on Sumburgh’s FogHorn!

Sometimes I find the unexpected. Being a great fan of the Dutch singer/songwriter Ramses Shaffy to stumble upon a recording I had not seen before brought tears to my eyes. A 72 year old Ramses sings “laat me” with Alderliefste, in the presence of Liesbeth List. All present are very much aware of how special the moment is indeed.
Not being able to share my love for this great singer with my friends on Shetland is one of these things that I had not seen coming.

Posted in Column | Comments Off on Ramses 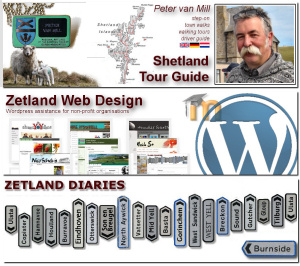 Best way to learn something new is to do it your self. In this case it was extending my knowledge and ability to build websites based on WordPress using what is know as the ‘Presentation-page’. This page makes your website start with a ‘splash’ screen before you get to the get to the actual pages of the site.
For this exercise I chose to do what I would always advise against, that is, do three different things within one website. Advocating my Guiding services, my Webdesign assistance offer and maintaining the blog, that is my Zetland Diaries as it has been for the last four years. You might want to have a look around, click on the Web Design and Tour Guide pages and see what you think. Hardest thing is always to keep it simple. Also based on colours and style already used in the Diaries the other pages should fit in. As for other functionality, the availability calendar I hope will prove a useful addition to the site. Feel free to use the contact page if you spot any oversights or mistakes.

Posted in Column | Comments Off on Learning-by-Doing 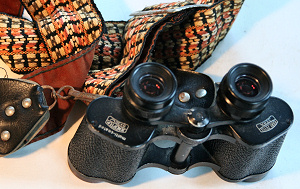 One of the first things on my shopping list after I had bought my house on Yell was a pair of binoculars. A sea view from the kitchen window dictates that there should be a pair on the windowsill. Also in the glove compartment of the car there should be a pair specially when you drive around a lot. As some of my college tour guides are  keen birdwatchers I learned what quality difference there can be. My Korean and Chinese pairs and the Russian monocle one are OK but not great. So you can believe my excitement when I spotted this little gem in de window of the Save the Children charity shop. Spending  £19 for a good cause was no proplem. A proper Carl Zeiss 8×30 1974 pair of tattered but perfectly functional pair of binoculars. Slightly disappointed at first with the fogged up image but after a good clean-up which meant taking it completely apart it polished up really well. On one lens the coating is gone but I am very impressed by the clarity and I love the vintage strap that came with it.

Posted in Column | Comments Off on Carl Zeiss 8×30 Binoculars