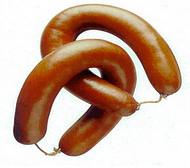 What a treat. With about an hour to kill before the bus leaves for Yell it’s time to have a little lunch. Getting up early, shopping and dropping the car at the airport makes hungry. Normally it would be a healthy sandwich on brown bread from the Perry Cafe. My favorite is Brie (made locally, Skelt diaiy) and cranberry saus. Wonderful. Today passing the along on Commercial street flattened on the pavement was something that strongly resembled a half HEMA worst.

The local high school was having its lunch break and with the weather being sort of ok it usually means that droves off students walk up and down Commercial Street. They socialise, eat, smoke, down a fair dose of soda cans and do what young students do. Dropping stuff also goes with the territory and that might explain the squased sausage in the street.

For those unfamiliar with dutch customs, the Hemaworst was one of Hollands first accepted street foods and is still very popular. Even in the seventies people walking and shopping could be seen enjoying a greasy warm smokes sausage.

It took a while but I found the source of the much loved ‘halve rookworst’ as a smoked sausage is called in Holland. Unox is the most well known brand.

At the Fort Cafe & Take Away for only 3£ I had bought chips, mayo and half a smoked sausage. What a treat, and as it had been in the heated display counter long enough the taste like home….